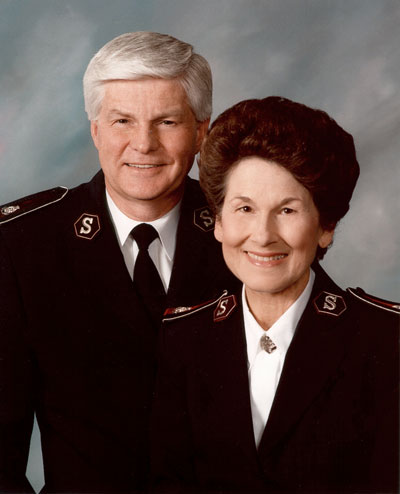 William Francis, a second-generation Salvationist, was born and raised in Troy, New York. Upon graduating from high school, he entered Houghton College where he earned a Bachelor of Arts degree in 1966, having majored in music and history. In the summer of 1965, he studied at the Free University in Amsterdam, Holland. Upon completion of his undergraduate work, he attended Asbury Theological Seminary, graduating with a Master of Divinity degree in 1969. In May of 2002, Houghton College conferred on him an honourary Doctor of Divinity degree.

Marilyn (née Burroughs) is a first-generation Salvationist. She attended Houghton College where, during her senior year, was one of ten finalists in the Metropolitan Opera tryouts and was also guest soloist for an East Coast evangelistic crusade conducted by Dr. Clyde Narramore. She graduated in 1965 with a Bachelor of Music degree and became a junior high school music teacher in Dansville, New York. From 1966 to 1967 she was a voice instructor at Asbury College. In 2003 she graduated from Greenville College with a Master of Arts in Leadership and Ministry.

They met while attending Houghton College and were married there in December 1965.

During the years 1969-71, William was employed as a field representative for The Salvation Army in Bergen and Passaic Counties, with headquarters in Newark, New Jersey, while Marilyn taught music in the Pompton Plains public schools.

In September of 1971, they entered the School for Officer Training in New York City as part of the “Blood and Fire” session of cadets. For their second year of training, they were given an advanced appointed as cadet-lieutenants in charge of the Danbury, Connecticut Corps. In 1973, they were ordained and commissioned as lieutenants and remained at the Danbury appointment where they ministered to a growing congregation and oversaw the construction of a new corps facility that was dedicated in May of 1977.

In 1975, Marilyn received the honour of being listed in Outstanding Young Women in America.

In August of 1977, William was appointed as the Divisional Youth Secretary for the Massachusetts Division, and Marilyn was appointed as the Divisional Corps Cadet Counsellor. For four years they served in these capacities until July of 1981 when William was appointed as the Assistant Territorial Youth and Candidates Secretary of the USA Eastern Territory, and subsequently, as Territorial Youth and Candidates Secretary (1984). Marilyn was appointed as Director of the Corps Cadet and Junior Soldier Bureau and was responsible for the promotion of work among young people between the ages of 7 and 18 who are junior members of The Salvation Army, as well as those who are enrolled in the Bible, doctrine and leadership course known as Corps Cadets. This appointment afforded Marilyn the opportunity to lead a select group of ten young people to the Inter-Territorial Corps Cadet Congress in Scotland.

William was also a member of the New York Staff Band, playing the Eb Bass brass instrument. During the summer of 1982, he played with the band on their world tour that included concerts in Norway, Sweden, Thailand, Australia, New Zealand and Hawaii.

In November of 1986, William was appointed as General Secretary for the Western Pennsylvania Division, with headquarters in Pittsburgh. In his position of second-in-command for the division, he also served as director of operations for Allegheny County. Marilyn was appointed the Divisional Home League Secretary where she gave direction and support to the 43 Home Leagues associated with corps in the division.

In May of 1989, they were appointed as divisional leaders for Northern New England, with headquarters in Portland, Maine. As Divisional Commander, William was responsible for the administrative and ecclesiastical oversight of Salvation Army operations in Vermont, New Hampshire and Maine. Marilyn served as Director of Women’s Organizations giving direction to programs for women in the three northeastern states in that division.

In September of 2000, William was appointed Chief Secretary and Marilyn as Territorial Secretary for Women’s Ministries of the USA Eastern Territory. Together, they gave oversight to the Army’s work and programs in 11 divisions from Kentucky to Maine, as well as the Puerto Rico and Virgin Islands Division. On April 1, 2003, they were appointed to International Headquarters in London, England, with William as International Secretary for the Americas and Caribbean, and Marilyn as Zonal Secretary for Women’s Ministries for the Americas and Caribbean.

On July 1, 2007, Commissioners William and Marilyn Francis assumed appointments as Territorial Commander and Territorial President of Women’s Ministries for Canada and Bermuda, respectively. They were honorably retired from active service in June 2011.

Commissioner William Francis was elected President of the 2011 High Council called to elect The Salvation Army’s next international leader known as the General.  Commissioner Francis was subsequently nominated as a candidate for General.

Marilyn is an accomplished vocalist and pianist. She has produced an audio recording of vocal and keyboard improvisation of hymns and gospel songs titled “Just a Closer Walk”. Proceeds from the sale of this acclaimed recording underwrite vocal scholarships to a summer music institute.

They have also been zealous advocates for Christian higher education. Up until his appointment to International Headquarters, UK, William served as a Trustee for Greenville College and a member of the President’s Advisory Board at Houghton College. The Houghton College Alumni Association named Commissioners William and Marilyn Francis as Alumni of the Year for 1996. Commissioner William Francis served as Chancellor of Booth University College in Winnipeg, Manitoba (207-2011).  In 2012 he accepted an invitation to serve as a member of the Board of Governors for Trinity Western University in Langley, British Columbia.